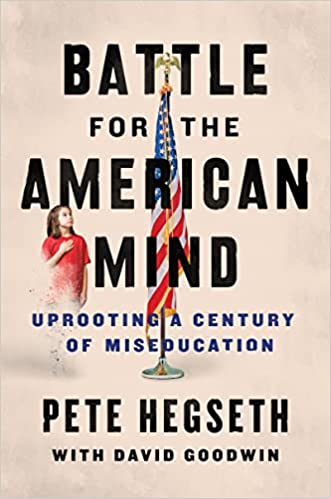 From David Goodwin president of the Association of Classical Christian Schools.

On June 14th, “Battle for the American Mind” will release as the first major release from a mainstream publisher on classical Christian education. I wanted to give you a heads up on this book, who its for, and why I authored it with Pete Hegseth.

Before the first announcement about the book this weekend, the book took on “Best Seller” status in certain categories– for what that’s worth. This is encouraging. Amazon currently has it floating in the top 20 books nationwide, and it’s still in presale. Many of you know I wrote the pamphlet “Discover Classical Christian education” which CCE schools use to explain classical education to parents. My goal with “Battle” was to reach further outside our circle and draw parents into classical Christian education from outside. As it turns out, much of the response to the book thus far has been from intellectuals like Victor Davis Hansen, who appreciate the historical approach and the depth in the work.

“Battle” will be promoted fairly heavily on FOX over the next 8 weeks because of Pete’s involvement. However, for those who are concerned about taking political positions, the book is published by Harper’s Broadside imprint (Not their FOX imprint). While the book is critical of cultural Marxism and critical theory, it is not particularly patriotic or “FOX News” like. It presents a Christian narrative that transcends politics. And, it tells a story few know.

Here is a synopsis of the book from it’s jacket:

Behind a smokescreen of “preparing students for the new industrial economy,” early progressives had political control in mind. America’s original schools didn’t just make kids memorize facts or learn skills; they taught them to think freely and arrive at wisdom. They assigned the classics, inspired love of God and country, and raised future citizens that changed the world forever.

Today, after 16,000 hours of K-12 indoctrination, our kids come out of government schools hating America. They roll their eyes at religion and disdain our history. We spend more money on education than ever, but kids can barely read and write—let alone reason with discernment. Western culture is on the ropes. Kids are bored and aimless, flailing for purpose in a system that says racial and gender identity is everything.

Battle for the American Mind is the untold story of the Progressive plan to neutralize the basis of our Republic – by removing the one ingredient that had sustained Western Civilization for thousands of years. Pete Hegseth and David Goodwin explain why, no matter what political skirmishes conservatives win, progressives are winning the war—and control the “supply lines” of future citizens. Reversing this reality will require parents to radically reorient their children’s education; even most homeschooling and Christian schooling are infused with progressive assumptions. We need to recover a lost philosophy of education – grounded in virtue and excellence – that can arm future generations to fight for freedom. It’s called classical Christian education. Never heard of it? You’re not alone.

Battle for the American Mind is more than a book; it’s a field guide for remaking school in the United States. We’ve ceded our kids’ minds to the left for far too long—this book gives patriotic parents the ammunition to join an insurgency that gives America a fighting chance.